Selected Option Combination is not available.

Short Description:
This high-performance Mode Desk is a sturdy study desk. Equipped with cable management and the option to choose top, a drawer, and handles to make your own.

This sturdy high performance desk is the best desk solution for a small space. Equipped with cable management, a leg slot for discreet wiring routing to keep all your cords organized. Customize this desk to your liking, with the option of 5 top colors, 6 storage drawer colors, and two handle finishes. The optional drawer cabinet that can be installed on either side to your liking. The Mode's laminate surface is durable and easy to clean. This small desk will leave a big impact on any space, with a pop of color! 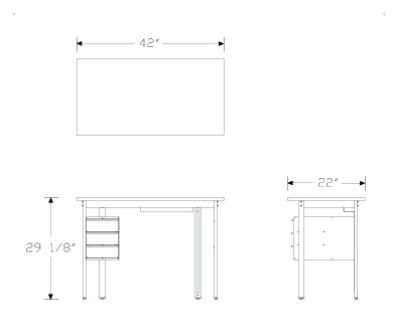 Afteroom is the creation of wife-and-husband design team Chen-Yen Wei and Hung-Ming Chen. Wei grew up in Taipei City, Taiwan, the daughter of insurance clerks. With the family based in a crowded city, her parents “tried their best to give us more contact with nature,” she says, “and I’ve appreciated beautiful things ever since.” Wei graduated from National Taipei College of Business.

Founded in West Michigan in 1905, Herman Miller has grown to become a world-recognized furniture brand. As a design leader and furniture innovator, they’ve partnered with some of the most influential and iconic designers of the 20th century—designers like Charles and Ray Eames, George Nelson, Isamu Noguchi, Alexander Girard and more. In doing so, they’ve produced pieces that have become classics of industrial design, many of which are featured on permanent display in museums like the New York Museum of Contemporary Art (MoMA).

Herman Miller continued that legacy in 1994 by partnering with designers Bill Stumpf and Don Chadwick. They went about developing an office chair unlike any before it. Bringing together the latest in ergonomic research and design, they developed the legendary Classic Aeron chair, the best selling office chair in the world.

Today, Herman Miller continues that tradition of design forward thinking and innovation. Partnering with the next generation of industrial designers—such as Studio 7.5 and Yves Behar— as they tackle the ergonomic and anthropometric challenges we face in today’s modern work life.

From design to manufacturing, delivery to service, when you buy from Herman Miller, you can expect quality. We confidently back every Herman Miller product with a warranty that covers virtually everything—including electrical components, casters, pneumatic cylinders, tilts, and all moving mechanisms.To learn more read the Herman Miller Warranty.

Pick Storage Cabinet Color if you have selected the storage option.

Pick Handle Color in Black or Walnut if you have selected the storage option.

Your Product has been successfully added to cart!